A community of plants, animals and microorganisms, and the non-living environment they interact with.

Ecosystems exist on many levels, and on different scales. A small lake and the community of organisms that live in it, is an ecosystem. If the lake is located in a forest, the forest including the lake is also an ecosystem.

Ecosystems are not isolated from each other, but are connected by different interactions. Through the movement of animals and plants or via wind and rain, organic and inorganic materials cross the boundaries.

In this way Earth itself can be considered one large ecosystem, since the various ecosystems on it are all connected on some level. The global ecosystem is usually called the biosphere.

Many ecosystems are probably negatively influenced by global warming and climate changes, since the living conditions change. Therefore, even if only a few species are vulnerable to change, their absence may negatively affect the whole ecosystem. Preserving a high biodiversity is a way to protect ecosystems, and it is also the official policy of many countries. 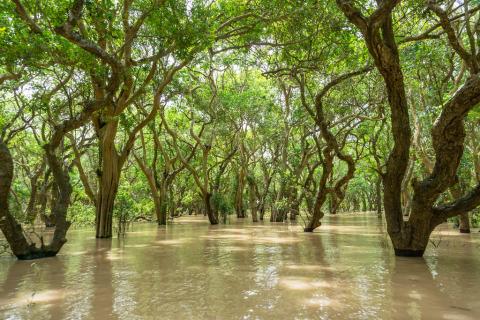