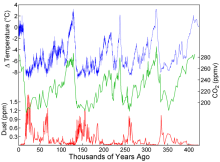 Change in global climate over time.

Climate change can have natural causes or it can be caused by human activity. Purely natural causes include volcanic activity, ocean variability, and solar variation. Humans have no influence on these.

The amount of methane in the atmosphere has also increased a lot since industrialization. Today more than half of all methane emissions stem from human activities.

A significant part of climate change is caused by other processes which also occur both naturally and to which humans also contribute very significantly: Aerosols, glaciation, and albedo.

Predictions about future long term changes in climate are made by using climate models. These models use supercomputers to process gigantic amounts of data from the past and the present in an attempt to predict future climate.

Data from short term changes in climate are used by meteorologists in climate models to predict changes in weather. This is called weather forecasting.

The study of climate and climate change is climatology and it includes all the factors that can affect the climate.