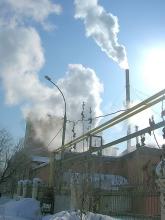 Made by humans or caused by human activity.

In the context of climate change anthropogenic, effects are usually referring to CO2 or other man-made greenhouse gas emissions that result in increasing temperatures.

Not all anthropogenic emissions result in global warming.

Sulfate aerosols can exert a cooling effect by increasing the reflection of incoming sunlight. This partially accounts for the cooling seen in the temperature record in the middle of the twentieth century.

The IPCC has concluded that most of the increase in temperature since the mid-twentieth century is "very likely" due to the increase in anthropogenic greenhouse gas concentrations.