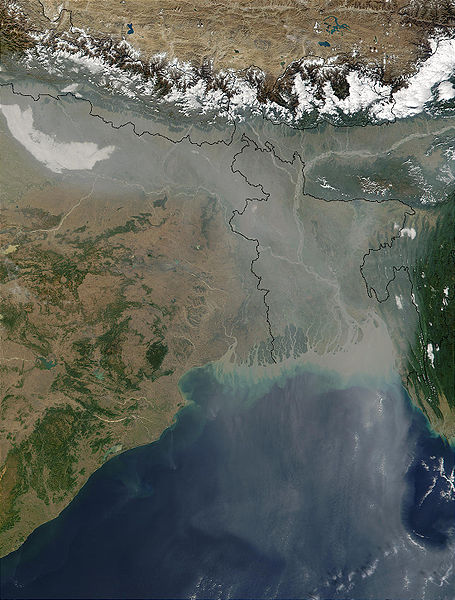 Solid particles or liquid droplets suspended in a gas.

Aerosols can be found in smoke, air pollution, and smog. All of these are also composed of other things than aerosols. Aerosols pose serious problems to human health, and they also have an effect on weather and climate.

In relation to climate change, one of the most important aerosols is sulfate aerosol. It is released to the atmosphere both by natural processes and by human activity, especially the use of fossil fuel. Sulfate aerosol is broken down rather fast and so is mainly a problem only so far as much new sulfate aerosol is produced.

Aerosols cool the climate in two ways. Directly, under clear sky conditions, by reflecting some of the incoming solar radiation. Indirectly, by increasing the reflectivity of clouds and making them last longer. The indirect effect involves aerosol particles acting as cloud condensation sources, spreading the cloud's liquid water over more, smaller, droplets.

Since aerosols tend to cool, some have suggested that aerosols may cancel out the effect of global warming from greenhouse gases, but that does not seem to be the case. The cooling and warming occur mostly over different parts of the world. Aerosol effects are mainly focused over industrial areas in the Northern Hemisphere, whereas warming effects may be greatest over subtropical oceans and deserts.

The aerosol effect is also more short lived and seasonal. Aerosol effects are most pronounced during daylight hours in the summer. The activity of greenhouse gases, on the other hand, differs very little over the course of a day, or over a year.

Volcanic activity cause massive outpouring of sulfuric gases that convert to sulfate aerosols in the atmosphere.

Aerosols also affect clouds and can induce changes in precipitation patterns. This is important for regional water resources, and may contribute to a change of the climate on a global scale.

Scientific studies have shown that forcing by sulfate aerosol is not evenly distributed over the globe. Its concentration varies a lot from region to region. Since aerosols become more abundant in some regions because of population growth and development, we might expect to see dramatic changes in regional weather patterns in the future.

In everyday language, the word aerosol often refers to a spray can or the spray coming out of such a can.