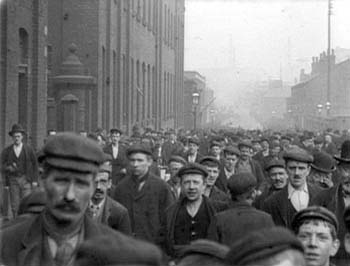 The shift from an economy driven by manual labor and agriculture to one driven by large factories using machines.

The industrial revolution started at the end of the 18th century in Britain, and spread from there to the rest of the western world. The process included changes in many different areas of the economy and society.

An fundamental change was in the methods of production. The normal production of goods on a small scale in workshops and homes was replaced by larger production in factories. Here new inventions such as spinning machines for the textile industry and steam engines made the factory production more efficient and advanced.

As the methods of production changed so did society in many ways. Manpower was needed to work in the factories, so new towns were created and existing towns expanded as people moved in from rural areas.

Steam power played a major role in the industrial revolution. With steam power, it was possible to power the industry and transportation (locomotives and ships). Coal was used to fuel the steam engines. The dramatic increase in the number of factories caused a massive increase in air pollution in the cities.

The industrial revolution that started in Britain and swept across Europe has since continued around the world, and is still happening in some countries today.

In the debate on global warming and climate change, the industrial revolution is commonly referred to as the beginning of increased human emissions of greenhouse gases.