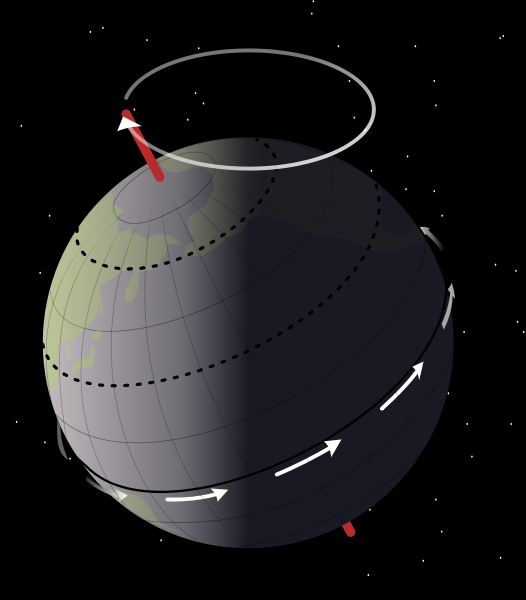 The cyclic changes in climate caused by variations in Earth's rotation and orbit.

Named after the Serbian astrophysicist Milutin Milankovitch (1897-1958), who developed a theory to explain long term variations in seasons, and in the solar energy received at different latitudes. According to the theory, the variations are caused by a combination of three types of cyclic variations in the Earth's movement through space.

These three cyclic variations, called the Milankovitch cycles, are periodic changes in the Earth's eccentricity, obliquity and precession.

Eccentricity is the shape of the Earth's orbit around the Sun. It constantly fluctuates between a more or less elliptical shape, changing the Earth's distance to the Sun as it orbits. The cycle has periods of approximately 100,000 and 400,000 years. This difference in distance to the Sun translates into a difference of insolation, i.e. the amount of energy received from the Sun.

Obliquity is the tilt of the Earth's rotational axis, and is what causes seasons. A cycle is on average 40,000 years long. As the tilt of the axis increases, the contrast between seasons becomes stronger. In both the northern and southern hemisphere winters become colder, and summers warmer. When the tilt decreases, the difference between seasons becomes less pronounced, with cooler summers and more mild winters. Cool summers may allow the buildup of glaciers.

Precession is a change in the direction of Earth's rotating axis caused by the gravitational pull of the Moon and Sun. As the Earth rotates around its axis, the axis slowly "wobbles" like a slow spinning top whose axis is no longer upright. Because of the precession, the direction in which the axis point traces a circle in space. A full circle movement of the axis takes about 26,000 years.